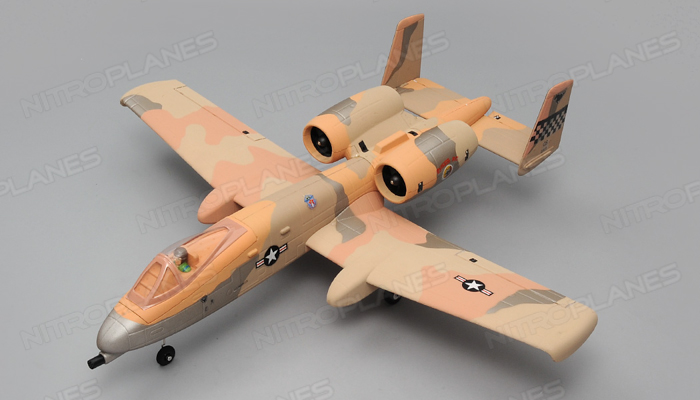 The Dynam A-10 has been an awesome flying machine in the Dynam Fleet. Dynam decided to upgrade this bird with servo-less retracts. The A-10 has superb maneuverability even at low speeds and altitude, this is due to its large wing area, high wing aspect ratio, and large ailerons. This design also enables short takeoffs and landings, allowing it to operate from the smallest and most basic airfields. This model gets power from two 64mm electric ducted fan units and lets of an awesome sound during flight. All servos, motors, and retracts are preinstalled from factory. Like all the planes in the Dynam range, the Dynam A-10 is constructed of quality EPO foam and finished to a high standard that represents an excellent replica of the real aircraft.

This almost ready to fly version twin 30A electronics speed controllers provide power to the twin 64mm 3300kv ducted fan units. You will need an 11.1v 2200mah battery, charger, and radio system to complete the electronics requirements. You will also need to complete assembly of the plane to get it ready for flight.